The MHS LUNCH BUNCH MEET EVERY SECOND THURSDAY OF THE MONTH-HOPE TO SEE YOU THERE!

The March 2020 Lunch Bunch were a brave group. Those braving the Covid19 Virus to meet other brave souls are shown here. A special welcome to Warren "War" Weaver from Nevada is in order.  See more of you in April as you return from the warmer climates.
December LUNCH BUNCH-
A limited number of hearty souls made it to the December LUNCH BUNCH.  Frank Arcand (MHS '60) joined the group in December.
Lunch Bunch for November was terrific. We welcomed Neil Christenson, teacher and coach, along with John Maturen, teacher and coach this month.
The October 2019 Lunch Bunch gathered  again at the Village Inn/Stadium Club. Lots of memories shared and discussions of those leaving for the south.  These brave souls are sticking around for the winter (well, at least some of them).
LUNCH BUNCH gathering August 2019- We had a fun group at the August Lunch Bunch affair. We welcomed Jerry and Bev Kohn from Michigan and Joyce Easton's grandson, from Illinois, Zach Steffensen. I think he really enjoyed the old folks. Thanks for coming Zach.
May, 2019 Lunch Bunch gathered and what a group it was!!!! Lots of folks from MHS, and friends got together and shared thoughts and laughter.  We welcomed Rog and Judy Hedin this month. Rog, returning from his health issues and lookin' great!   Check out the slide show below.

​December Lunch Bunch 2018 getting ready for the holidays.

The November 2018 Lunch Bunch was well attended with over twenty MHS'ers showing up.

Lunch Bunch June 2018-We hadn't seen Paul and Ann Stegmeir (MHS '60) and Tom Kluge (MHS '59) for too long.  Welcome back. Great group again in June 2018. It's always great seeing our leader, Math teacher and coach, John Maturen at these gatherings
LUNCH BUNCH April 2018-Twenty-five friends got together for the monthly luncheon in April.  A good time was had by all. Check out the pics below.
DECEMBER LUNCH BUNCH. Butch Rabel, who shall hereinafter be known as the official photographer, took the pics of the Dec. gathering. Lots of classes represented here. I heard it was a great time had by all....as usual!
Lunch Bunch Nov. 2017. Nice gathering of MHS'ers again this month. Butch Rabel bailed out before the pics were taken but he was there.
October 2017 Lunch Bunch
What a banner group we had at the Oct. Lunch Bunch. The 1960 class was best represented (as it should be) but no one seemed to hold it against us. The visiting was fun, interesting and informative. Hope to see y'all on November 9th.
Lunch Bunch August 2017 featured a lively group getting ready for the All Class Gathering Aug. 25th at the Dugout. See ya there!
Lunch Bunch July 2017- Thanks to Mary Jo Stangl for taking over the photog job for the July Luncheon...Great job!!  It looks as if everyone enjoyed the gathering again in July.  Prepare for the August Lunch and
June 2017 was a great Lunch Bunch Group
The Snowbirds arrived back home and it was a great May 2017 Luncheon gathering of MHS alumni

Had a nice group for the March 2017 Lunch Bunch. Notice Kay Rabel is missing from the pics....she took'um.  Thanks Kay!!
Not a BIG group but a fun one at the Feb. luncheon.  See you at the March 10th Lunch. Snowbirds will be coming home soon! 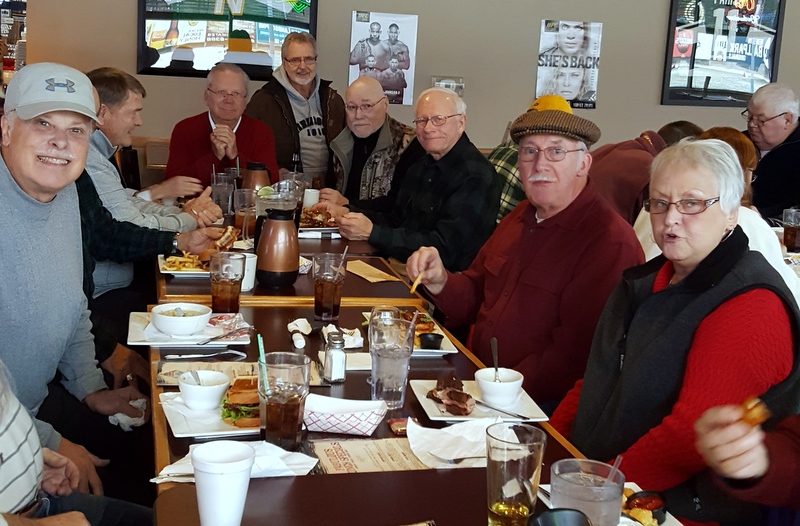 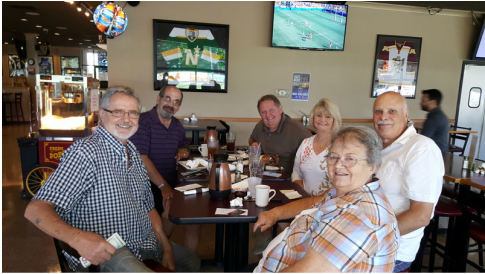 February 2016 Lunch Bunch...welcome Phil Zietlow to the Feb. group.  Good time had by all! 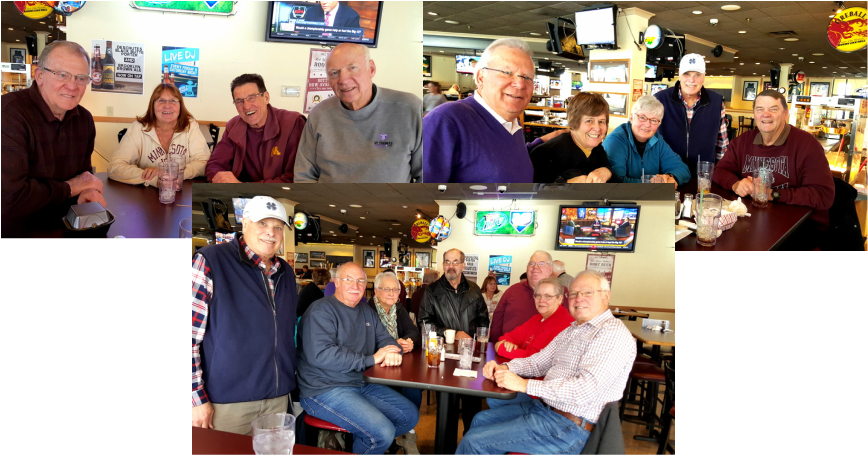 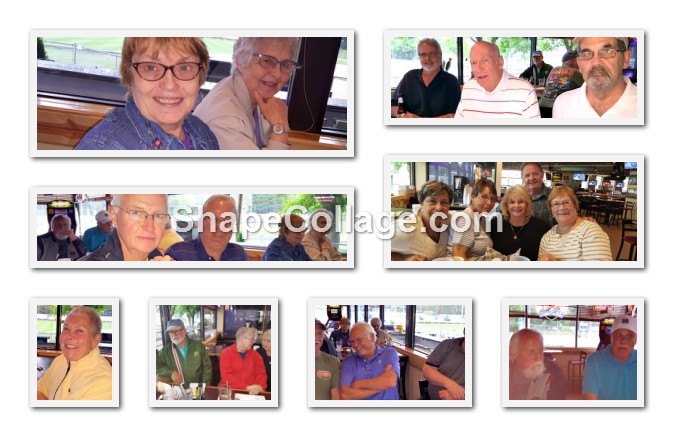 Lunch Bunch June 2015
A nice variety of guys and gals came to the June Luncheon.  See you next month.

Lunch Bunch May 2015-There was a near record number of folks that gathered together for the regular luncheon in May.  See the collage of pics from the lunch by clicking "lunches" at the top of the page.

Check out the many folks that attended the May luncheon. 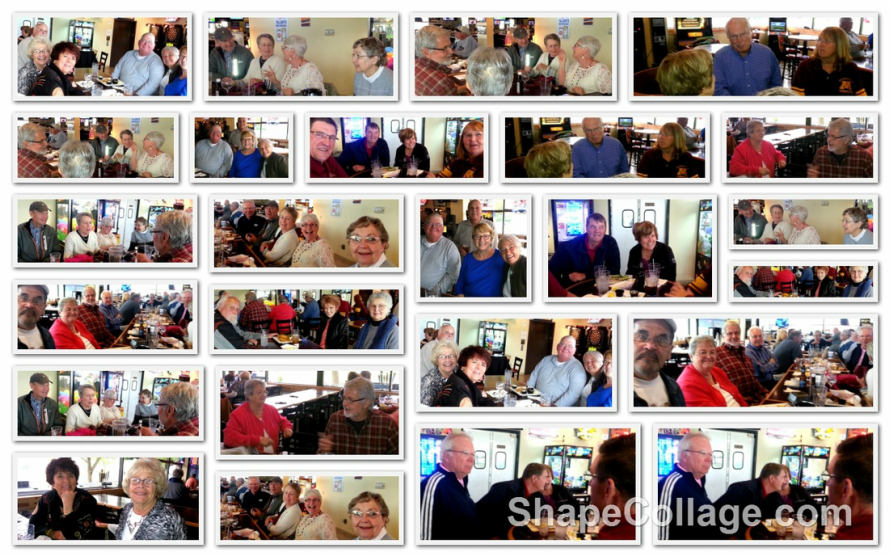 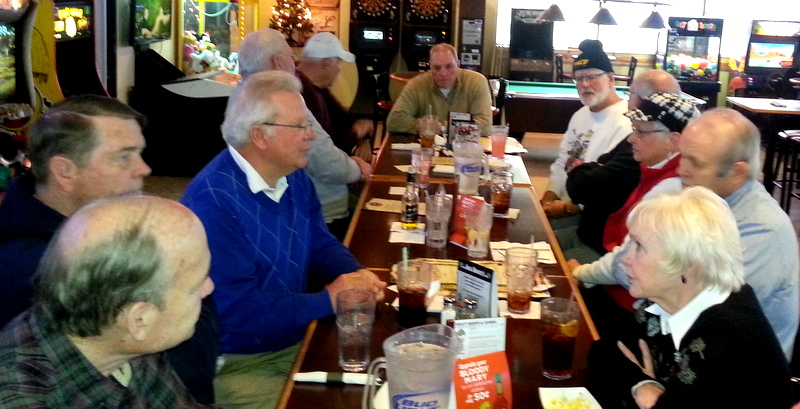 - Sixteen folks prepared for the holidays by joining for lunch in December.  Lots of laughs this time as usual.  Hope to see everyone that can make Feb. 12th.
September 2014 Lunch Bunch- Had lots of good friends at the Sept. lunch (32 of 'em-see below) and had a great time talking about the good old days and learning more about where folks have been and when some of them will be going south for the winter....lucky stiffs!
We welcomed brothers and sisters, Gary and Sandy Flint (L) and Jan and Al Spidahl (R). It was great having them aboard. What a great group this month.

Gary and Sandy flint and Jan and Al Spidahl 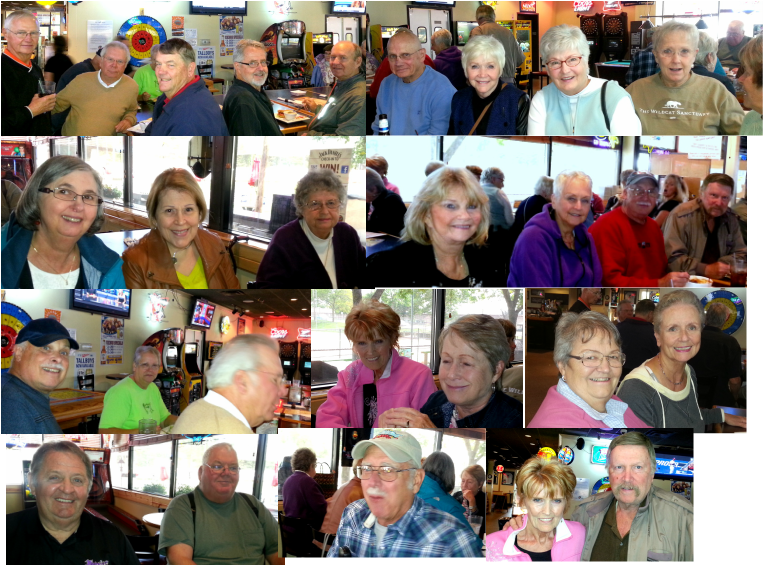 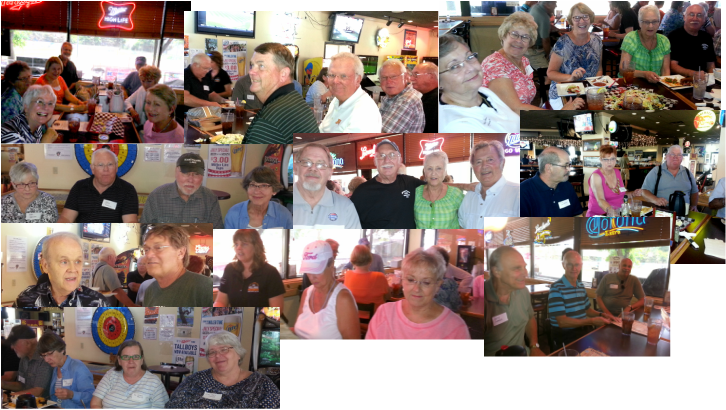 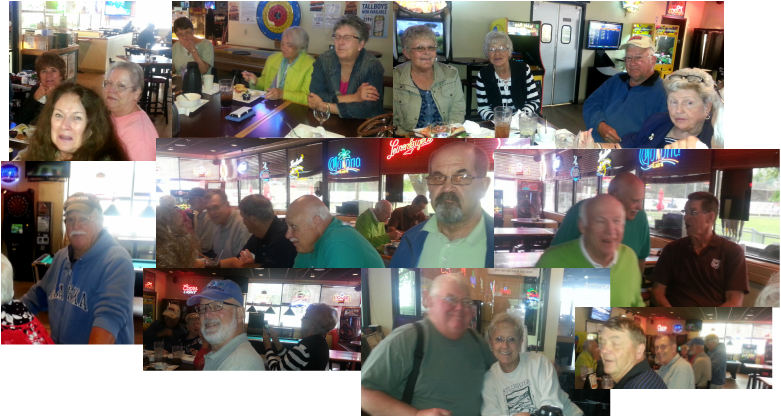 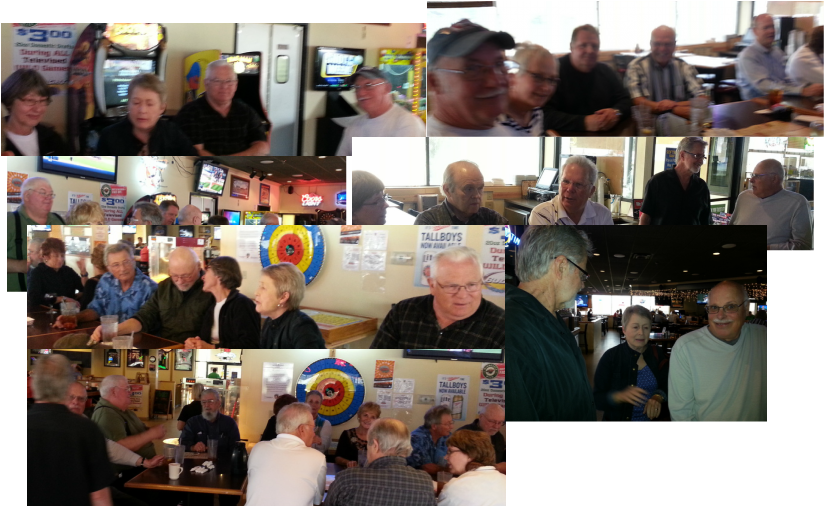 MAY LUNCH BUNCH-2014 Nice group of old friends gathered again in May for the monthly lunch....recognize anyone? 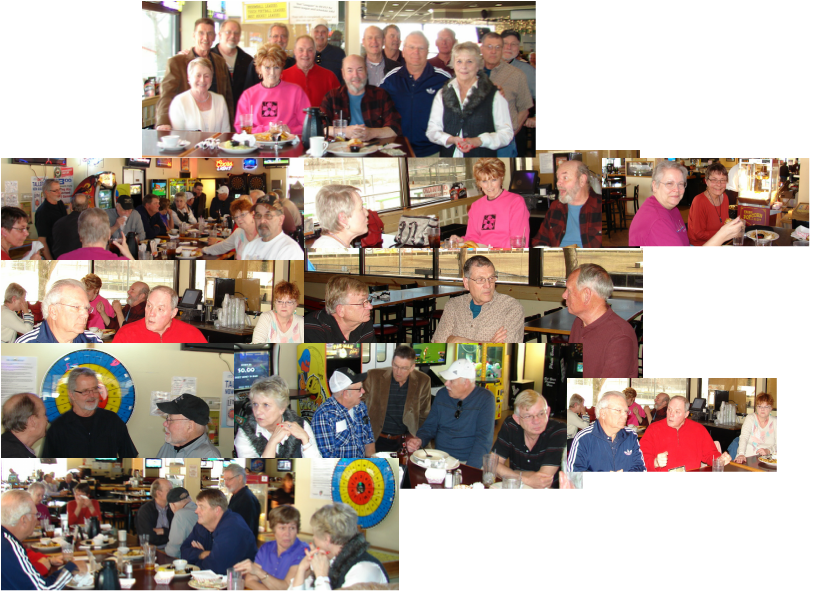 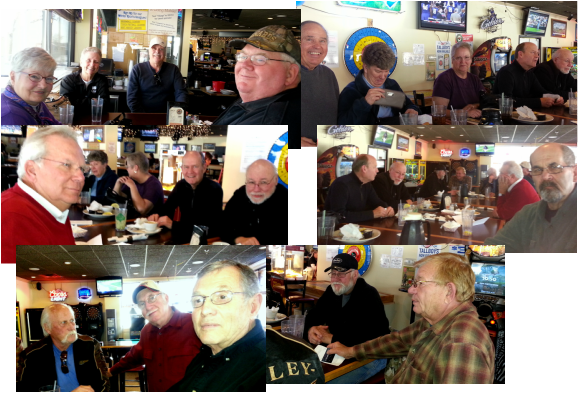 March 2014 Lunch Bunch
Enjoy the pics of the March Lunch Bunch. We're looking forward to seeing some of our "snowbirds" next month and in May. 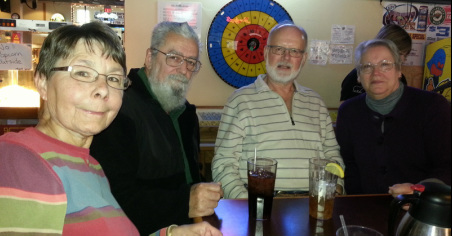 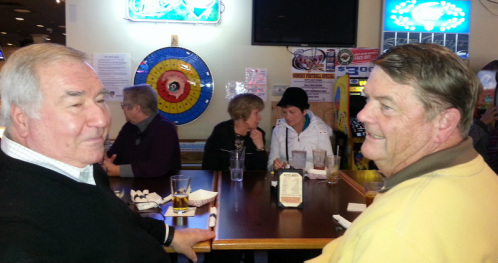 Great to see Bruce Faribault at this months lunch. It brought back lots of memories. Here, Bruce yaks it up with Johnny Strenger. 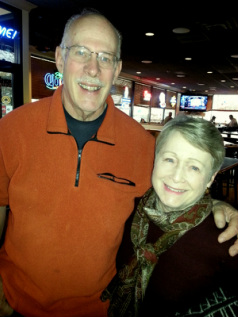 It was fun seeing Rick Demars see his former neighbor, Lael Eaton come into the building. He went over, gave her a big hug, asked her if she remembered him from 50 years ago and the smiles and fun began!!! This is what it's all about folks. Hope to see you December 12th, same time, same place.

September 2013 Lunch Bunch - More than ever! 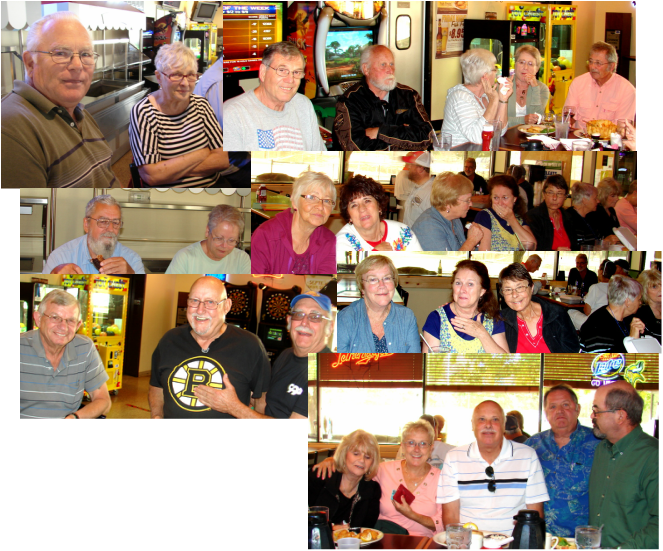 Top to Bottom -L to R (As always, Maiden names always ..Jerry Robinson, Babs Robinson, John Duvlea, Norb Peltier, Carole Lennartsen, Lael Eaton, Al Stiles, Harvey Strecker, Joyce Easton, Karen Rudin, Patty Reed,Nancy Dunlap, Laurel Harholt, Karen Duncan, Kris Hanson, Patsy Willis, Jeff Duvlea, Jerry Pierre, Gary Jensen, Sharon, Laurel, Karen and Kris (again), Patsy Willis Peggy Zimmerman, Pete Kluegel, Pat Willis and Jim Langford. Bill Gary and Sue Sell had to leave early.
Thirty-two of the MHS grads made it to the August lunch bash! Classes '58 to '64 were represented and it was great.  Thanks so much, from Jim and I to all of you, for the surprise B'day card and cake. I think I know who started that event and we'll getcha back, I promise.  Here are some pics of those that attended. What a great time!!!

We have the best service from the "Stadium" Staff! Do you see her?

Jim Greeley, Tom Langford and Butch Rabel welcomed Sandy to the lunch group! (Below) Jack, Judy and Jackie.Marcia and Gary Thaler ('69) Butch, Tweety and Kay. JIm and Paul. ..and Pete Terry, Karen and Jim.
We had another great time at the monthly lunch in Feb. at the Village Inn and Stadium Club. Check out the pics below...Sandy Flint Keister and Jackie Swenson Thauwald joined everyone for the first time and it was great seeing them again. 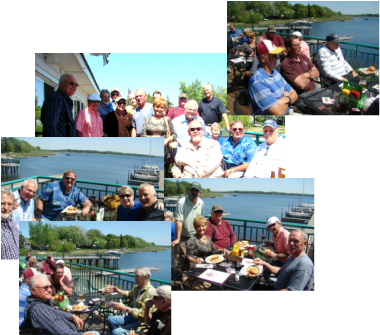 We had eighteen friends join the May lunch group at the WBL VFW. What a great day and great time. 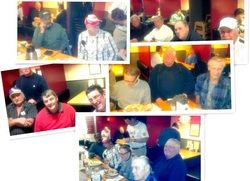 Another lunch is in the books and a great time was had again in April, 2012 at Donatelli's. We welcomed Gary Hinsch ('62) to the gang (next to Johnny Strenger) and fifteen of us gathered to laugh a bit and share memories!